TIGERS ON THE COLUMBIA 2023 COUNTDOWN 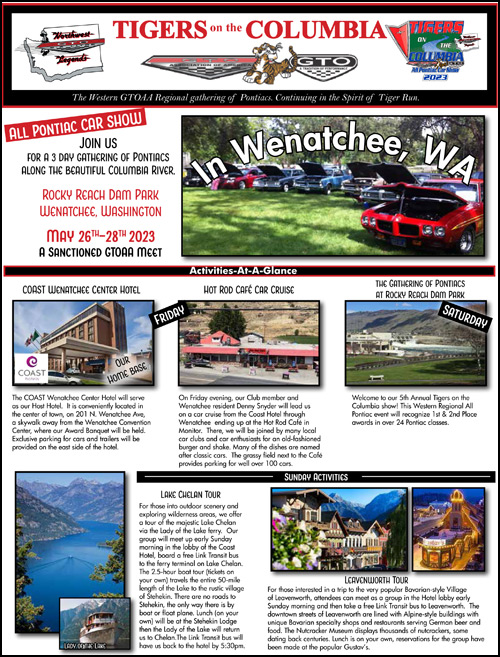 Stock and Modified classifications will be based on the GTOAA’s Popular Vote Classing guidelines as described in their “The Legend” magazine, since the “Tigers on the Columbia” event is a GTOAA Western Regional Sanctioned Event.

The Stock class will contain cars that look essentially stock with factory type paint & interiors. Replacement Pontiac V-8’s will be allowed and induction systems should match the year. Non-stock wheels (with the exception of Hurst wheels) are not allowed in the Stock class. Engine compartments should look stock.

The Modified class is designed for cars that exhibit the owner’s originality & taste. Cars with custom paint, non-stock wheels & tires, extra chrome or headers are examples of car that would fall into the Modified class.

The Pontiac Modified for Performance class is for cars that obviously exhibit speed and performance type modifications. These kinds of modifications include but are not limited to; roll bars, blowers, narrowed rear-ends, slicks and/or extremely wide tires.

The Pontiac Project/Runner class includes any Pontiac that’s a work in progress (has or is currently being worked on and has not been completed yet), and any running Pontiac, either of which, the owner wishes to display at this “Tigers on the Columbia” event.